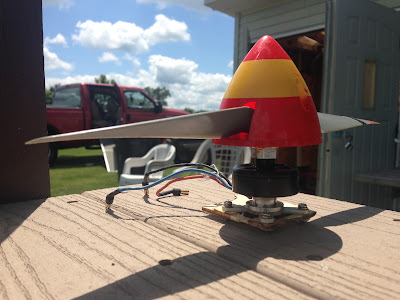 For those that had "other" things to do on Saturday (Gary), you missed an exciting day of pylon racing: two closely contested races, two bad hand launches, and two spectacular crashes. Mike U. had a bogey launch on the first race, leaving Dave M.and Rob C. to mix it up for first. Rob took the first heat, only to flop his plane on the next hand launch. Mike won the second heat with Dave in second.
Rob tossed his untested Parkzone plane into the last heat with encouragement from the other racers. After all, it would have been less exciting with only two planes in the race. 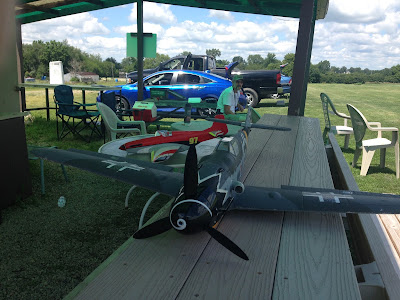 Dave and Rob were neck-and-neck for second behind Mike until the eighth lap, when Rob pushed his plane too hard and clipped the southern pylon with a loud SMACK!  The guys were having a great time and didn't want it to end just because one of the planes busted into several bits. Hot glue to the rescue! 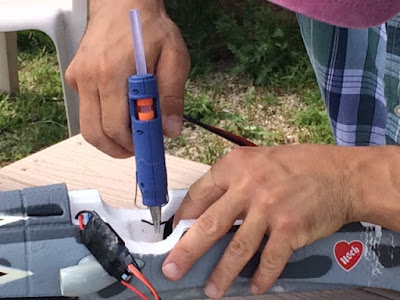 THREE STICKS of glue later, the planes took to the air again for a bonus round of racing. Unfortunately, the pylon impact had damaged the bond between the spar and the wing
of Rob's Parkzone BF-109, causing the wing to flex unpredictably in the turns and...well, try flying an airplane where the wing twists! 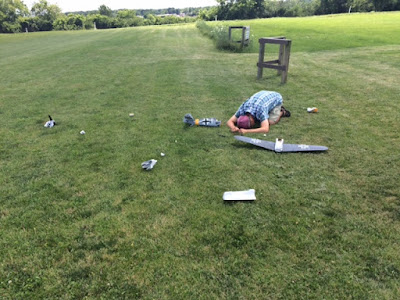 It was a great day at the field, and we hope to see more members and spectators out to take part in the fun. The next race day is August 19th.


Click HERE for the season points standing.
Posted by Mad River Flying Assoc. No comments:
Email ThisBlogThis!Share to TwitterShare to FacebookShare to Pinterest

The ups and downs of the hobby.

The past weekend was perfect for getting out to the field. The clubhouse was busy on Saturday and Sunday with members taking advantage of the glorious summer weather. On Sunday, we had a particularly eventful day, with some great models flying and a notable unfortunate event.  Bill A. finally got his excellently-built, fabric covered J-3 Piper Cub into the air- three times! The Cub's four-stroke sounded great, and it really embodied the spirit of the full-scale plane as it circled the field. Three flights and safely back in the hangar! That's a good day of flying.
Bill H. did not have the same fortune. His trim little biplane was on its fourth outing this Sunday, and had performed well until the dreaded gremlins intervened. On his last flight, the transmitter lost connection with the plane, and nothing could get it back to the field. Sadly, it ended up buried in a field, shattered to bits. The receiver battery was fully charged, and everything else appeared proper- perhaps the radio equipment had a flaw.  Equipment failure can happen, and if you are a model aviator you should be prepared for the risk when you put your plane up into the air, as Bill did. He'll be building another plane soon.

It was truly perfect flying weather for the July meeting. We had several hours of flying- everything from glow engines and electric war birds to combat wings. Thanks to Bill H. for trimming the field before the meeting. 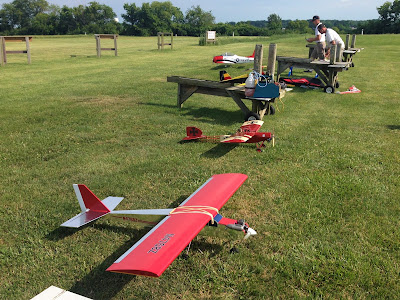 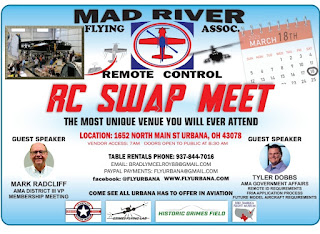 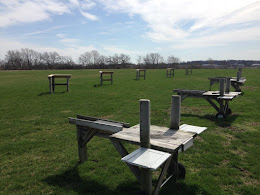